You are here: Home / General / Gestalt Perception in Photography

Gestalt psychology is an attempt to find laws and principles of how our mind organises the seemingly chaotic world and describes how we get and perceive meaningful information. The psychologists have formed a bunch of laws and principles showing how our brains work. Since gestalt perception is about organising things, it blends nicely with the composition because it serves the same purpose. And we artists can apply these concepts to the art to improve the perception of our works. The most efficient application lies in design but we also could steal a few things and use it for photography.

Law of Proximity states that we perceive objects located near each other as a group. This way we use a group of objects as a composition building block rather than a single object. 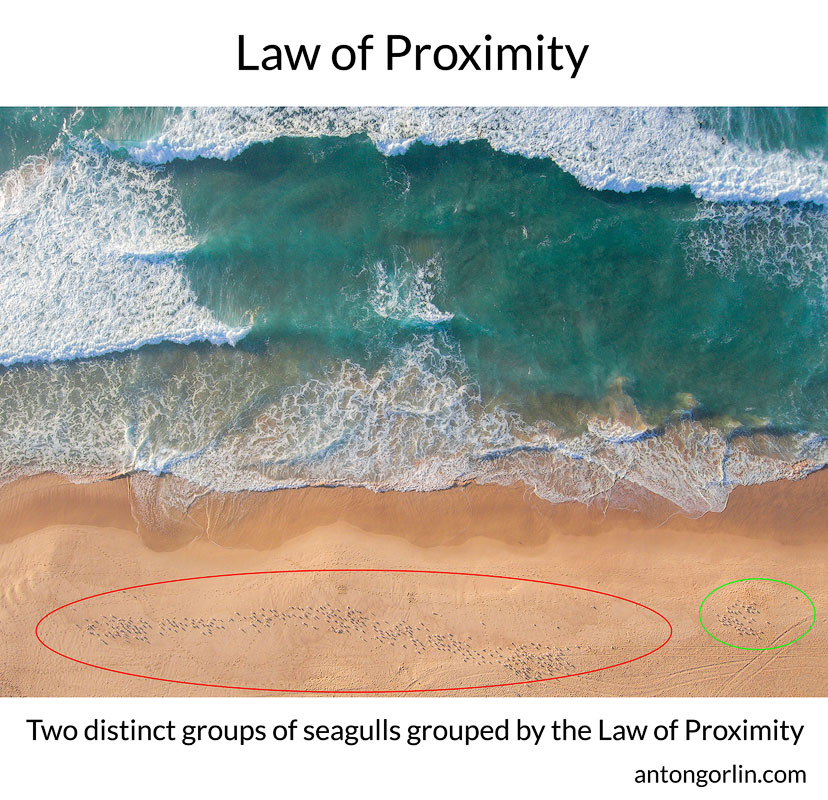 This separation doesn’t add much to the story here but is very good for illustrating the principle. The storytelling example would be to show some hint of relations between the groups.

We also group objects which have some sort of similarity. The can have a similar shape, colour, size, etc. The usage is the same as for the proximity – we can use a group of related objects as a composition accent. It also helps with the storytelling. 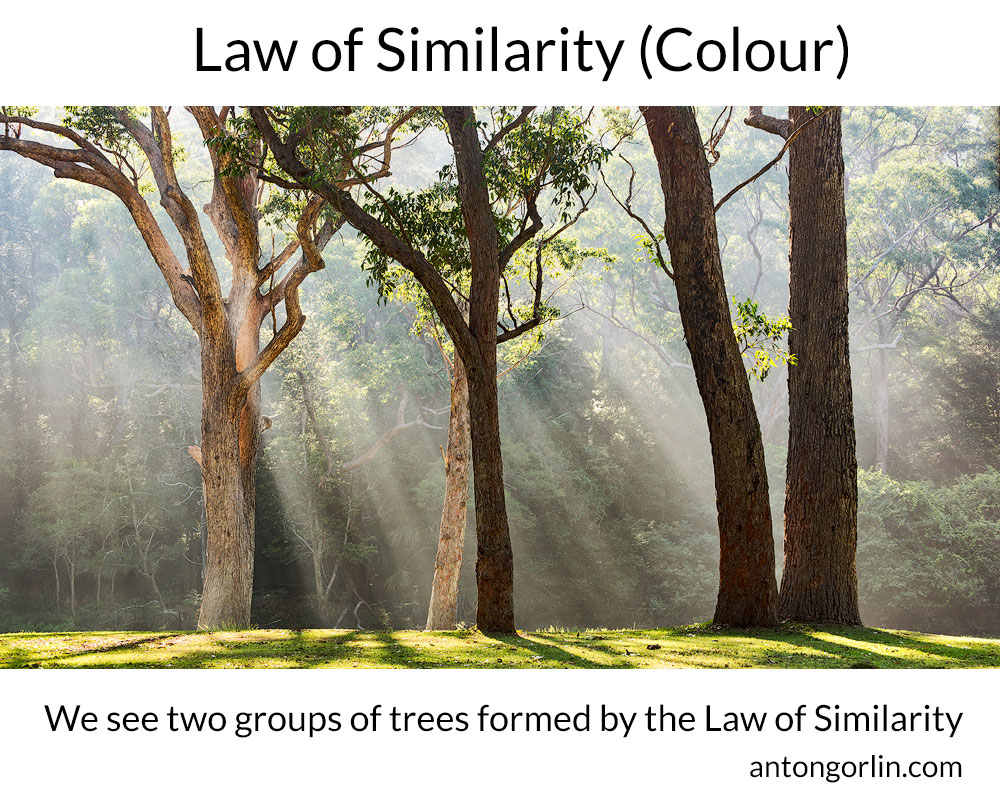 In this instance, the dark and light groups help us to read the photo and create some story behind it. The photo above is called a “Wedding” or a “Dance”. This would not be possible without the Similarity Law grouping. 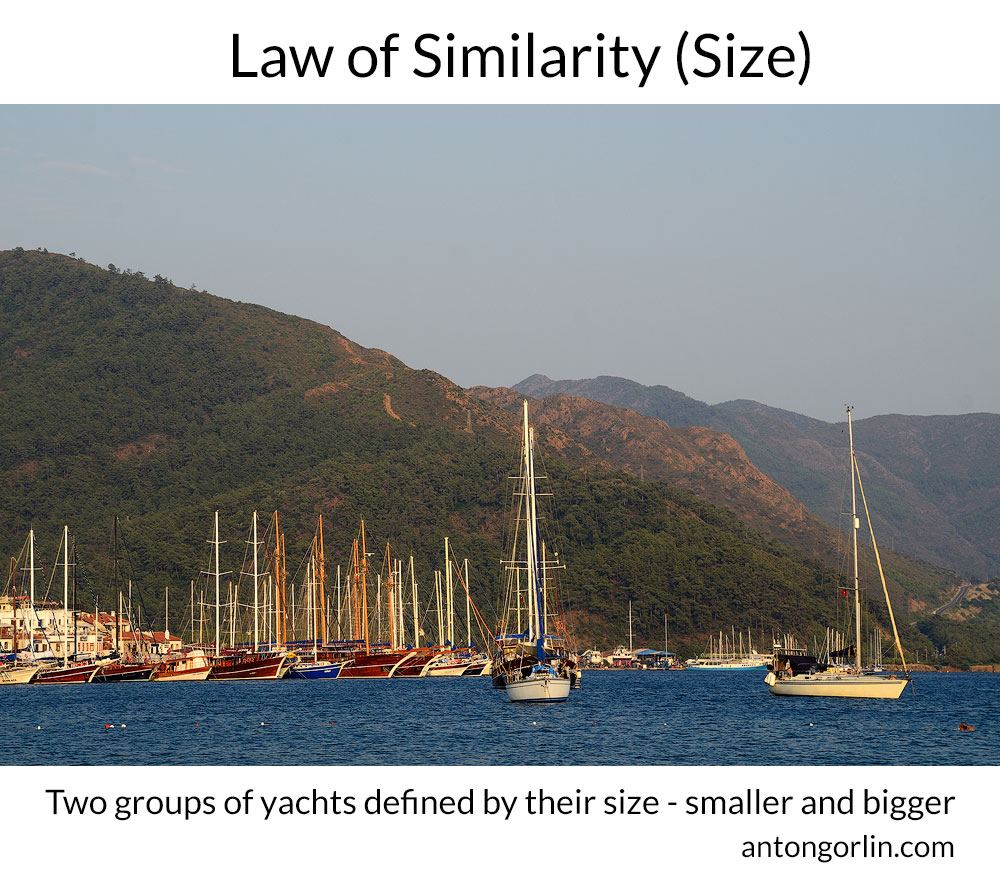 We can easily name this photo “Leaders” because it just makes sense with the two bigger yachts.

Law of Closure supports the Suggested Lines principle and extends it to the Suggested Shapes. This means that our brain fills the gaps and forms shapes with whatever lines are present in the photo. This law is fundamental and useful as it allows to build shapes inside of the picture, make accents and control the flow of the viewer’s eye. I’ve covered this topic in the Composition Building Blocks section. Law of symmetry describes our brain’s tendency to look for symmetries and group objects around this principle. Humans are mostly symmetrical, and this way of things is natural for our perception. It’s also easy to break this law increasing the tension – break the symmetry where it is suggested. The important thing to understand here is that we are not talking about something precisely symmetrical, an approximation is usually good enough when we are talking about photography.

Some of these laws are pretty challenging when it comes to the actual implementation. Have a look at the photo below:

Ok, but why do we even care? This law doesn’t really add to the previous photo apart from breaking the rhythm, it just sits there. But the photo below, on the contrary, shows a usage example.

Law of Common Fate states that we perceive objects as a whole if they have the same moving path or we think they do. We think that the objects moving in a similar direction share the motion trends and thus a common fate.

According to the Law of Continuity, we group elements that are aligned with an object, and we are less likely to combine ingredients that have distinctly different directions or alignments. This one is exciting. It states that we tend to filter our parts of the reality, to simplify the surrounding to find order and regular pattern. In my experience, it should be a purpose rather than a tool when we talk about photography. Our eyes do filter out a lot of things, but it doesn’t work when we look at the photo. So, we should deliberately get rid of all things that do not work for the story we are trying to tell. We should make an effort to present a final photo as a clean product. So that a random viewer immediately sees it as having a good gestalt.

Law of Past Experience

This law says that we can group objects based on experience rather than momentary layout. If we know that the objects tend to appear together or shortly one after the other, then we group them. There are few consequences here:

The main gestalt principles are emergence, reification, multistability and invariance.

This principle tells us that we perceive an object as a whole, not as a collection of parts. It has little application to photography.

Reification is a practical law. This principle states that we can perceive more spatial information that it is present in the picture. It confirms one of the composition principles I describe elsewhere in this article – the suggested lines building block. Our brain tends to expand and build on top of what we see. We extend these shapes with some illusory contours.

Of course, these shapes do not apply to photography as is. Rather, we need to understand the principle – how some objects create or suggest some other shapes that do not, in fact, exist in the original photo. The most simple application is suggested lines.

Multistability describes ambiguous perception going back and forth between several interpretations of an image. Some sort of the optical illusion. It has a wide application in design and graphics and no so easy to do in photography.

One use is to seek Pareidolia objects in our everyday life.

Invariance suggests that we perceive objects in the same way regardless of their rotation, deformation and scale. If we recognise an object, we can quickly identify it in any state.

This principle has many applications in photography and art in general. Scale, figure-to-ground relation, linear perspective. The fundamental idea is to use Invariance and represent a well-known object in unusual conditions or environment.

On the contrary, we could do something opposite:

How To Use Gestalt Psychology

This chapter is the most theoretical one in the whole article and doesn’t show any practical tips or techniques. Yet, it serves a useful purpose – gives another perspective and expands our understanding. It’s not that easy to transform these laws and principles into some magical recipes. These laws are beneficial for planning shots and telling a story. They tell you how to separate part of the photographed objects and how to build relations between them.

Like any other theory, it has its critics. The main arguments against Gestalt Psychology are:

Such critics make sense, and we should not blindly believe any of these. Instead, let’s try everything out ourselves and see if it works.

Gestalt psychology is another take on formalising the human perception of art. Right or not, it definitely has something behind it and it helps to understand how we tend to organise things. This could help us to create better stories and convey without any words better.

Buy me a coffee

Decorate your home with some brilliant wall art!
Prints and Products